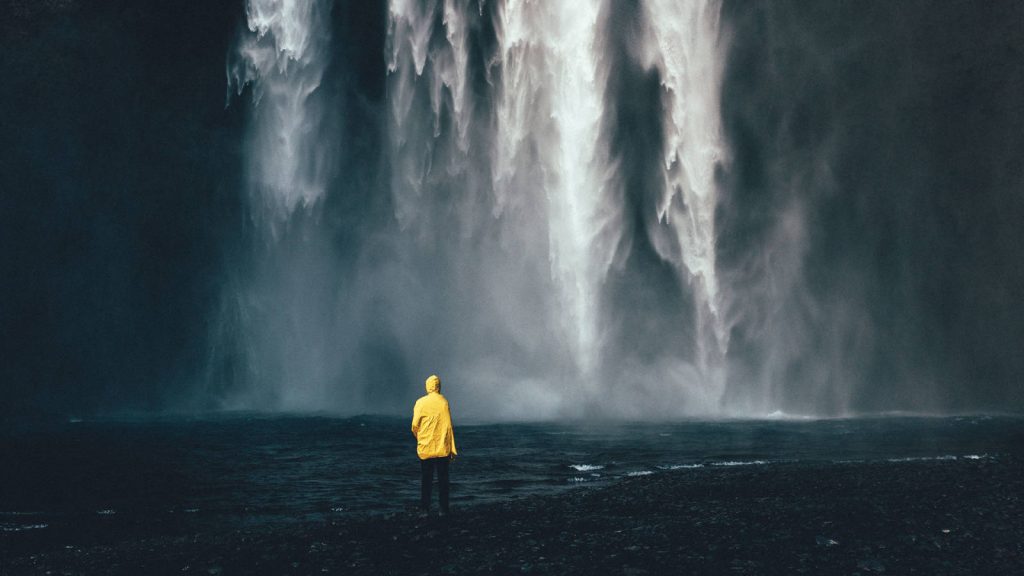 This article originally appeared in theMay 2003issue of Yoga International.

So long as we are not enlightened, we experience ourselves as limited identities—islands of embodied consciousness. We think we are a particular body-mind and relate all our experiences to this inner center we call the ego. If we do this in an exaggerated fashion, others regard us as egomaniacs. If we attribute the workings of the larger world to ourselves, we are delusional. Psychologically speaking, the ego is an essential and necessary aspect of human development. From a spiritual perspective, however, the ego is a mechanism by which we distort reality.

We only need to inspect our body-mind a little more carefully to realize that this is so. For instance, our heart is pumping blood without our own doing. Our lungs are sucking in and expelling air of their own accord. Our stomach breaks down food and our intestines assimilate its nutrients without our doing anything. Our brain generates electric waves all by itself.

Similarly, thoughts pop in and out of our head whether we like it or not, as any meditator can readily verify. In the language of yoga, all these activities are simply nature (prakriti) at work. Yet we persistently lay claim to the body and the mind and their numerous activities.

Me, my, and mine are labels by which we mentally and emotionally separate ourselves from the rest of existence.

Nature is full of surprises. One such is the appearance of an inner reference-point—the ego—in higher organisms. In human individuals, we see its clear emergence first in the toddler who discovers the power of “me,” “my,” and “mine.” These are labels by which we mentally and emotionally separate ourselves from the rest of existence. Apparently other mammals—notably apes and some dolphin species—also possess a more highly developed sense of self. Even some birds seem to be endowed with this curious evolutionary attribute. For instance, the well-known parrot Alex enjoyed exercising his 500-word vocabulary until he got tired or bored and then pointedly refused to cooperate any further with his trainer, just as a human individual might do. But even an insect—think of a clever cockroach—will avoid potentially dangerous experiences so long as it can recognize them as such. As Patanjali notes, the will to live (abhinivesha) is rooted in all creatures, even in wise humans. But what is this will to live if not an outgrowth of the I-sense?

Much has been said about the evolutionary advantage of having an egoic control center. A great deal has also been said in the spiritual traditions about the need to go beyond the ego. We must remember here that the purpose of spiritual disciplines like yoga is to help us to go back to the origin, which means consciously tracing our trajectory back through evolution. For this reason, the spiritual traditions often speak of a process of involution by which we can traverse the evolutionary sequence in reverse order—going from complexity to ever greater simplicity until we are reestablished in the transcendental singularity (eka), which is the ultimate Reality itself.

Concretely speaking, this journey means simplifying our activities in the world; withdrawing our senses from the allurement of sense objects; focusing attention upon the subtle level of existence, which is the mind; discovering ever deeper (more subtle) aspects of the mind in order to transcend them as well; and finding out where the I-sense originates, which is in the transcendental superconscious identity itself. This ultimate being is called by various names. In yoga, the most common terms applied to it are atman (Self), brahman (Absolute), purusha (Spirit),purushottama (Supreme Spirit), and purna (Whole).

In the Shaiva tradition of Kashmir, this ultimate identity is also known as ahamta (literally “I-ness”). It is the ego-I of everyone and everything anywhere whatsoever. What distinguishes this transcendental Ego from the human-size ego is its all-inclusiveness. In our own case, we lay claim only to our body-mind and its activities, properties, and relationships. If we were to lay claim to the activities, properties, and relationships of other ego-personalities, we would be judged greedy, egomaniacal, or psychotic. So we need to remember that, in general, ego-personalities are very conscious and protective of their boundaries. Everyone wants to be an island unto himself. Some more so than others.

What distinguishes this transcendental Ego from the human-size ego is its all-inclusiveness.

No boundaries exist in the infinite Ego, the transcendental Self. It is simply the essence of the entire universe—past, present, and future. Therefore it is the great reality lurking behind even our own limited self-sense. And this is indeed a saving grace. For without the omnipresence of the transcendental Self, we would never be able to overcome our insular existence, that is, our self-incarceration in a specific body-mind.

All types of yoga—and there are many—give us the same basic message: Our present ego-habituation is a state of suffering (duhkha) from which we can and indeed ought to extricate ourselves. Our true nature is in fact the omni–present reality, call it Self, Spirit, God, or Emptiness. That is to say, at the bottom of our ego (ahamkara) is the Ego (ahamta). We just have to dig deep enough to locate it.

The sages of India have invented a range of methods by which we can go beyond the limited ego and realize the transcendental Self. The classical method of jñana yoga, for instance, is the neti-neti procedure; neti-neti means “not this, not that.” This procedure, which must be applied rigorously in meditation, allows us to progressively eliminate all our numerous misidentifications. “I am not my little finger.” “I am not my eyes.” “I am not my brain.” “I am not the body.” “I am not the mind.”

Ramana Maharshi, the great twentieth-century sage of Tiruvannamalai, proposed another method by which he himself had attained Self-realization. He called itatma-vicara, or self-inquiry in the form of “Who am I?” The practitioner asks this question and then listens inwardly without settling for an answer until the question, the questioner, and any possible answer are transcended in the flashing forth of the always-enlightened Self.

In our quest for happiness, freedom, and enlightenment, it is helpful to understand that the ordinary ego is simply a particularly ingrained habit.

In our quest for happiness, freedom, and enlightenment, it is helpful to understand that the ordinary ego is simply a particularly ingrained habit. And as with all habits, it can be unlearned. A further useful insight is provided by the philosopher-sages of Kashmir Shaivism. They have spoken of the ego as the act of self-contraction (atma-samkoca). In his Yoga Sutra, Patanjali speaks of the sense of “I-am-ness” (asmita), while other yogic schools refer to the same experience as the “I-maker” (ahamkara). This term better expresses the fact that the ego is not merely a persistent structure but an activity.

The ego is what we are doing right now! We are contracting consciousness, that is, we are congealing around “our” particular body-mind and its experiences. At the moment, unless we are enlightened, we are not consciously present as the infinitely expansive consciousness (cid-akasha). Rather, our consciousness is strangely incarcerated in our brain, and we gaze out onto an apparently external world through a single pair of eyes. The enlightened being, by contrast, inhabits all brains and bodies and sees through all eyes. As the Rig Veda puts it:

“Listen to the wonder! How wonderful: to stand outside as well as inside, to grasp and be grasped, to look on and at the same time be seen oneself, to hold and be held—that is the goal.”

The opposite of our common experience of self-contraction is expansion (vikasa)—not expansion of the ego but of awareness. The transcendental being is the most expansive “thing” there is. This concept is neatly captured in the Sanskrit termbrahman, which stems from the verbal root brih (“to grow big”), meaning that which has grown or is expansive. If the expansive transcendental Being-Consciousness-Bliss (sat-cid-ananda) were not our true identity, we would never be able to relieve ourselves of our limiting ego-sense.

Fortunately, our present condition is secondary, or nonessential. It is entirely a product of ignorance (avidya), which we can correct by taking to heart the wisdom and testimony of the masters of yoga. They compare our current state to a person pinching himself very hard and then wondering why there is pain. To relieve his pain, all that person has to do is to stop pinching himself, to release his grip.

The ego is a similar kind of grip. It is based in grasping or clinging. Therefore, to end our self-contraction, we must let go of the “consumer” habit. In yogic terms, we must cultivate the mood of inner renunciation. To put it another way, we have to value our true nature—the Self of all—more highly than any temporal or otherwise limited manifestation of it.

The notion of self-contraction as an activity suggests a possible practice: to observe ourselves moment to moment and consciously release all tension at the level of the body and the mind. Physical tension—our holding pattern of muscular contraction—can be released by means of such techniques as posture practice. Emotional-mental tension—from anxiety to anger to feelings of rejection, and so on—can be released through consistent mindfulness and cultivation of the witnessing disposition. If we are especially contracted at the emotional-mental level, we might also benefit from conventional pschotherapeutic intervention. Both somatic and mental contractions, furthermore, are prevented and to some degree dismantled by a wholesome lifestyle based on the recognition that we ourselves are the cause of our suffering. In other words, there are plenty of tools available to undo the ego habit, but we must be prepared to engage this process for the long haul. We simply do not know how much resistance we will encounter in unclenching our fingers.

The breakthrough to enlightenment can happen at any time, but we need to be patient and persistent in our spiritual practice.

The breakthrough to enlightenment can happen at any time, but we need to be patient and persistent in our spiritual practice. We may not be as fortunate as Ramana Maharshi who realized the Self in a single session at the age of sixteen. In any case, when spiritual life has happened to us, we no longer really have a choice in the matter. Even prior to full enlightenment, the path brings many rewards, not the least of which is a greater sense of ease and inner freedom.

All is One. The Entire World Can Be Reduced to this One Thing

Level Up on Life: So Much More to Life than the Accumulation of Riches